The academic homestead of Annika Waern 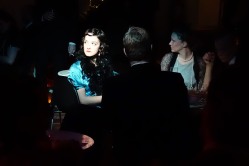 Participants in the October 2014 run of ‘Cabaret’, a larp musical that I was part of designing and staging.

This is a long overdue post; a follow-up to my reflections on storymaking in sport from 2012 (!) and why I don’t believe in emergent narratives in computer games.

Firstly, a recap: I look at emergent narrative as storymaking; as stories that do not just ‘happen’, but that we actively and consciously create from (or during) an experience of events. It is not something that every player is good at or even wants to do, not even in larp. Players engage in different ways in larp just as they do in computer games. In particular, there is an interesting and confusing interplay between storymaking and character immersion, which I’m not attempting to figure out in this post.

Let’s dig a bit deeper into storymaking. It is a learned skill, but it is also something we do in our everyday lives. Narrativists have studied it e.g. by looking into diaries and memoirs. Labov and Waletzky have characterized such stories as characterised by two aspects: “what happened, and why it is worth telling”. Bruner argues that we as humans organize our experiences primarily in the form of narrative – as stories, excuses, myths, and reasons. But again, narratives are constructed; they don’t emerge just because there are real-world events:

“Narratives do not exist, as it were, in some real world, waiting there patiently and eternally to be veridically mirrored in a text. The act of constructing a narrative, moreover, is considerably more than “selecting” events either from real life, from memory, or from fantasy and then placing them in an appropriate order. The events themselves need to be constituted in the light of the overall narrative … to be made “functions” of the story.” (Bruner)

Bruner doesn’t make a clear-cut difference between narrative in thought and in communication. He believes that creating narratives is like a tool that we learn, and that we internalize as part of our thinking about the world. It doesn’t matter if we tell the stories or not; they are still actively created by us even if only in our heads. The latter happens a lot in larp.

Since we have acquired skills for storymaking, designers can build on those skills. There are some popular cultural phenomena that are designed less as embedded stories, and more as fertile grounds for storymaking. Sports and reality TV shows are just two examples. While larp is less mainstream (although this may be a passing phase), it is interesting because it excels in creating structures that support storymaking.

Firstly, the qualities that I listed for sports are present also in larp:

But larps are more complex than sports. In sports, the storymaking process is unidirectional, based on a sequence of events that play out pretty much irrespectively of the stories people tell. By contrast, larps are collective storymaking machines. Kim has described how it works in table-top role-playing, and the same is pretty much true for larp:

“… an rpg player is acting in two capacities. As author, a player has a conceived story which is his imagination of what his character is thinking, among other things. By speaking and acting, he communicates this conceived story to the other players. As audience, the player also has a perceived story which is his interpretation of the actions of other players, which becomes his imagination of what happens elsewhere in the world.

However, these two stories are constantly interacting. The conceived story will be revised by what is perceived and vice-versa. Indeed, it is questionable whether they should really be considered as separate entities.”

This powerful storymaking process involves both designers and players. Larp designers will create settings, characters and in-larp events that serve to take the developing stories in certain directions. When players sense a story developing, they can individually or collectively decide to take it further. The stories created in a larp affect and steer the larp, while it is being played.

The key to understanding larp as a collective storymaking machine is that we as players read narrative intent into settings and events. If we were just ‘conceiving’ story, we would do what the sports journalists excel at: pick out the events that together well enough to create something worth telling. But when we assume that what is happening is already part of a narrative (somebody – actually a lot of people – are trying to tell stories), we try to figure out the intention behind what is done and said. We use our background knowledge about the narrator to figure out how each piece of information fits into the pattern. We hope to find some kind of consistency in our personal overall narrative as well, so we interpret the pieces we receive from that perspective – sometimes creatively misinterpreting them. It’s a rather confusing puzzle since a larp typically has dozens of stories going on at the same time. We communicate back in the same way, to gradually converge on synchronized if not identical stories – and the larp develops.

It doesn’t always work, of course. The design can help or hinder; the role of design cannot be underestimated (and I do have things to write on that too). Player chemistry is also important: sometimes we do not trust our fellow players enough to engage in collaborative storymaking, and sometimes we play in storylines that are too disparate to coordinate. But when it works, it’s like a dance where we sometimes lead, sometimes follow, every step contributing to our overarching experience.

Kim, John. Role-playing games as reverse drama and immersive story: A view of role-played drama. In “Beyond Role and Play” 2004.